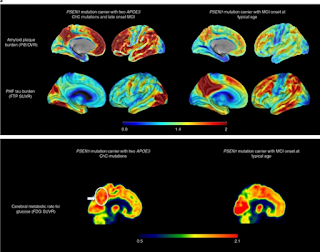 A team of researchers led by Yakeel Quiroz, Joseph Arboleda-Velasquez, Francisco Lopera, and Eric Reiman describe the case of a Colombian woman who inherited the autosomal-dominant E280A mutation in presenilin 1 but stayed cognitively well for decades past this mutation’s typical age of disease onset. While she had fewer neural tangles in her brain than is typical for Alzheimer's patients, by the time she hit her 40s she did have the same unusually high level of brain amyloid-beta deposits as her E280A peers. Such deposits are a key signature of Alzheimer's. The researchers believe the answer is a rare mutation in ApoE3 that disrupts the protein’s ability to bind lipoprotein receptors and other proteoglycans. Not only did she carry the Christchurch mutation, but she had two of them. No protection against dementia was linked to only one Christchurch mutation. But as this woman's case suggests, having two such mutations did seem to throw up a shield against Alzheimer's, preserving her ability to remember things and think clearly for a few decades, long after her E280A peers had started experiencing cognitive decline. In theory, the incredibly rare experience of this one woman in Colombia could ultimately have profound ramifications for Alzheimer's patients around the world, if "new drugs that mimic the effect of the mutation" could be developed, said Arboleda-Velasquez. Rather than stopping Alzheimer's from developing, such drugs would prevent Alzheimer's from causing dementia.