A Step Toward Putting Batteries in Humans 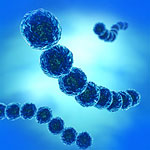 Ryota Iino is a Japanese researcher with the Institute for Molecular Science of the National Institutes of Natural Sciences. He and the other researchers focused on the V1 rotational motor found in the membrane of healthy cells. The motor acts as a pump, moving sodium ions through the cell membrane. They used an advanced probe to observe a single molecule from the bacteria Enterococcus hirae (above). They used the high-resolution images to develop an understanding of how the motor turns chemical energy into mechanical energy. They found that it works closely with another motor complex called Vo to convert the energy of the sodium ions into electrochemical potential energy similarly to how electric eels generate electric energy.

With further research, Ryota Iino plans to further understand the complexity of the energy conversion. If they are able to learn enough about the motor complex, he believes it could be possible to design an implant that could be put in electric eels of even humans to generate energy.