Many diseases that once killed people can now be treated effectively with antibiotics. However, some bacteria have become resistant to almost all of the easily available antibiotics. A new study published by researchers at Indiana University revealed a previously unknown role a protein plays in bacterial horizontal gene transfer.  A new imaging method invented at Indiana University leads to a discovery on how superbugs acquire antimicrobial resistance. Bacteria use thin hair-like surface appendages called pili for natural transformation.

IU scientists have made the first direct observation of how horizontal gene transfer that bacteria use to rapidly acquire new traits from its surrounding environment, including antibiotic resistance. It was understood that two motors with two distinct proteins controlled the activity to power pilus. Proteins known as PilB constructed the pili, and PilT, which deconstructed it. They discovered a third motor, PilU, that worked independently and could power the pilus when PilT was inactive. This was an important discovery because the more we understand how bacteria share DNA, the more chances we have at treating antibiotic-resistant bacterial infections. This could help save nearly 1 million people affected by antibiotic-resistant bacteria each year. 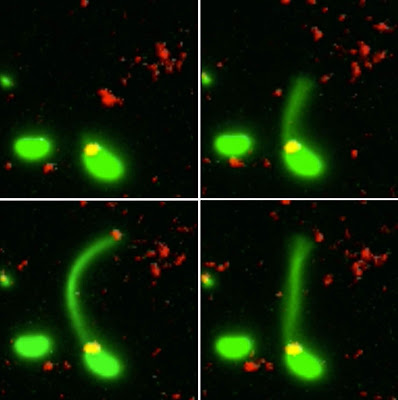 Starr, M. (2018, June 15). For The First Time, Scientists Have Caught Bacteria "Fishing" For DNA From Their Dead Friends. Retrieved October 21, 2019, from https://www.sciencealert.com/cholera-bacteria-using-pili-to-harpoon-dna-horizontal-gene-transfer-antibiotic-resistance.

Posted by Priyank Patel at 4:08 PM