On September 13th, 2019, the U.S. Food and Drug Administration announced that they had found a probable human carcinogen in products containing ranitidine. Ranitidine is a drug that is prescribed to lower the acid level of the stomach and reduce the symptoms of heartburn. One popular brand that is often prescribed by doctors and recommended by pharmacists is Zantac. The carcinogen that was found, N-nitrosodimethylamine (or NDMA for short), has been linked to causing tumors in the liver. The way that it forms is through the formation of such heartburn drugs, when labs are not careful enough to prevent the formation of NDMA. 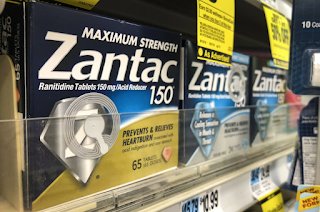 According to the National Cancer Institute, exposure to carcinogens damages DNA by causing somatic mutations that occur after childbirth. These changes can lead to the increased production of harmful proteins, which in turn cause a malicious cell to break the growth cycle and continue to grow into a cancerous tumor.

Though the drug has been found in small levels that are also found in common foods we may consume, it has still been pulled from shelves at popular drug convenience stores CVS, Rite Aid, and Walgreens. The FDA is still investigating the effects of this drug on human cancer development, but users should still be aware if they are still taking the drug. According to the New York Times, companies that produce and sell the generic form of the drug have also halted sales throughout the world. The drug was not even recalled, but the pharmaceutical industry is taking the FDA's claims very seriously until further notice.