Back in 1987 an Inuit tribe hunted belugas and narwhals in Disko Bay in Greenland. They ended up catching a strange oddity. Locals said they had never seen a stranger looking whale in their lives or since that moment. Past DNA analysis revealed nothing about the mysterious skull and the case remained a mystery, until recently that is. Recently, scientist cracked the case open and started to examine the DNA and structure of the skull and compared it to the skulls of similar marine life in the area, particularly belugas and narwhals. What they found was that the skull was actually a hybrid of both species. After tracking narwhal and beluga mating patterns, the pieces of the puzzle were finally put together. It was determined that Disko Bay was one of the very few places where belugas and narwhals mate. And they also concluded that because female belugas look so much like female narwhals, it is easy to mistake them, even to male narwhals. 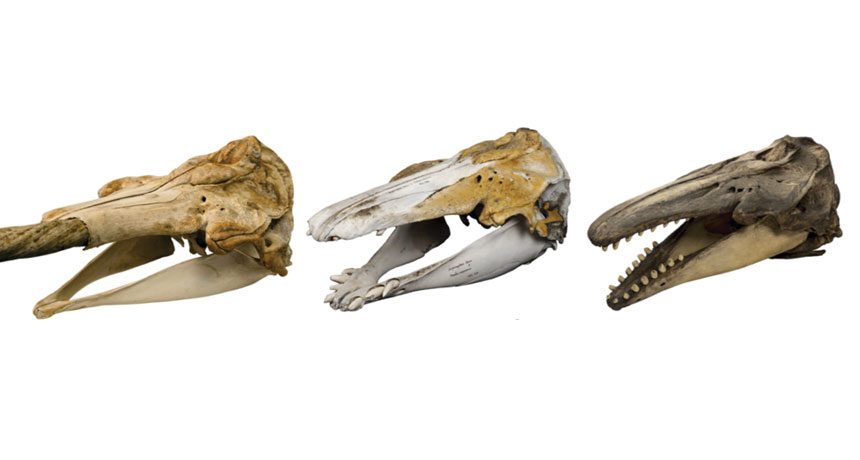 I find the research interesting in that it took so long to confirm. Just looking at the skulls, it looks like an evolution chart rather than a hybrid comparison. I also think it is interesting how the gene exert a sort of co-dominance in the mouth to show some teeth.
https://www.sciencenews.org/article/dna-confirms-greenland-whale-narwhal-beluga-hybrid
https://www.livescience.com/65757-first-beluga-narwhal-hybrid.html
Posted by Ben Hirthler at 5:47 PM