Taking the sting out: Australian gene editing is crossing the pain threshold

In the article, “Taking the sting out: Australian gene editing is crossing the pain threshold”, by Naaman Zhou he discusses the work done by Dr. Greg Neely and his team. He has been studying the science of pain for years. Back in 2010, he was able to find 400 new genes in fruit flies that are also found in humans that are related to pain. Recently, through genetics, he has seemingly cured the sting of the box jellyfish. 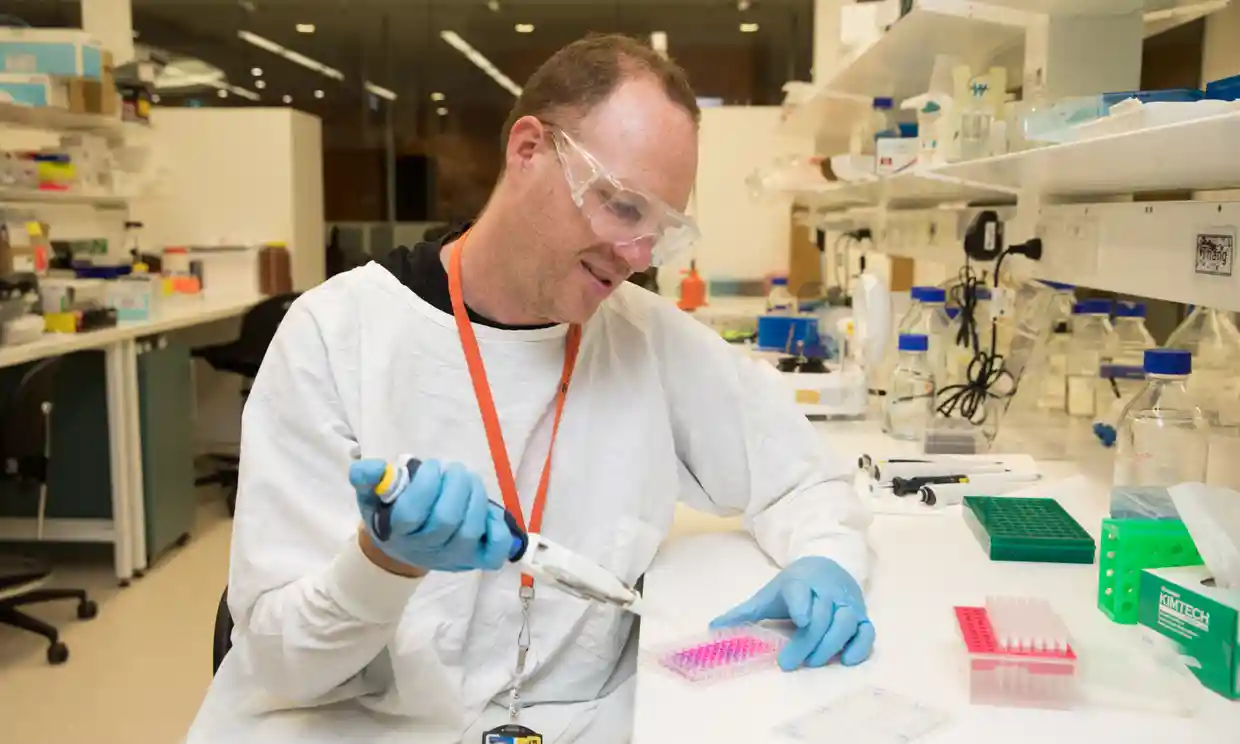 Pictured above is Dr. Greg Neely in his laboratory.

Located in Australia, his team utilized CRISPR to make the changes in DNA. To create the antidote, he took human cells and added the jellyfish venom. These cells died from the venom. Here is where CRISPR comes in. The team used CRISPR to edit cells, and then added more venom. The cells that did not die, were recollected. These resistant cells were sequenced. It was discovered that the cells that were unaffected had no cholesterol in them. So, to create an antidote, the solution would be to add something that leads the cells to lose their cholesterol to become resistant to the venom.
Now, in his lab, Neely is looking at all aspects of pain and looking into how he can utilize genetics to find more solutions. By using the same sort of ideas, genetics can be applied to anything from chronic pain to cancer. Cancer seems to be one of the largest obstacles in medicine that humans have had to face. Neely is looking into how the same genetic concepts he used with the jellyfish sting can be applied to cancer. He aims to minimize chemotherapy’s effect on good cells and increase its ability to fight malicious ones.
Other scientists also have the same idea to use genetics in cancer treatment. According to the article, “Gene mapping lays groundwork for precision chemotherapy”, around 95% of affected individuals are still getting chemotherapy, this seems like a good place to start. The basis is that all tumors are different. Each has a unique genetic profile, and there are more than 100 chemical agents available to use. The study looks at creating a map of gene-drug interactions. Typically drugs are used by how effective they are on average. Using genetics, chemicals can be matched to which tumors they can target the best.
To me it seems miraculous that we are already able to edit something as fundamental as genes. Genetics is really such an evolving field, and it was not too long ago that Watson, Crick, and Franklin discovered the structure of DNA. Learning about how scientists are already learning to apply CRISPR to real world problems is extremely impressive. It makes me very hopeful in the treatment of cancer that genetics could help be part of the solution. I can only imagine what more we will be able to do with even more time, experience, and knowledge.