Bottleneck Effect on the American Bison 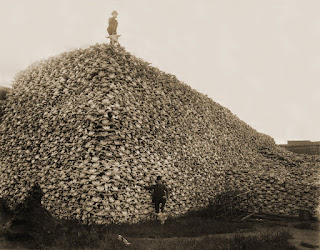 In the United States, there were once 60 million American Bison. During a time period in the mid to late 1800's the overexploitation of the animal caused that number to drop to about 325. This severe decrease in population size caused what is known as a "bottleneck effect". These types of events are caused by severe decreases in population size due to environmental or human activity. The results of events like this are usually not one that a species can recover from. Fortunately for this species, in the early 1900s, 5 private ranchers and government agencies worked diligently to make sure this American icon would not go extinct. However, this does mean that today's bison are all descendants from about 100 founders of the current population, and only 4 herds of genetically pure bison live in the United States today.
A bottle neck effect, like the one seen in the American Bison, can lead to many health problems for future generations. In losing genetic diversity, the future generation of wild bison become more susceptible to things like disease and pathogens. To combat this, ranchers and private government agencies bred the bison with cattle, which produces a hybrid, known as a "beefalo". Unlike other hybrids, this particular hybrid is fertile. This ability to reproduce as a hybrid helped increased population size, and brought the American Bison back to a population size of around 500,000. While 500,000 may seem like a high number, it is nothing compared to the estimated 60 million that once ruled the United States. Of these 500,000, only about 4% are in herds managed for conservation purposes, and roughly 10,000 are actual wild wood Bison. Many of the wild wood Bison are pestered by diseases like bovine tuberculosis, or brucellosis. This might leave you wondering, where are the other 470,000 bison living in the United States? These bison are used in commercial herds for meat, leather, and commercial production. Bison that are commercially farmed are bred for specific purposes, with specific mates. The artificial crossing of these bison, often with cattle, leads the American Bison to be more favorable for production of traits the ranchers find favorable, and not necessarily favorable for the survival of the species.
While the efforts to conserve the American Bison have made great strides, it still is saddening to think that the American Bison once ruled the United States, and now are essentially held in captive, only bred for profit. The American Bison is an iconic symbol of North America, once roaming from Alaska into Mexico. Now, they roam about 1% of the United States. Thanks to the genetic conservation of a few ranchers in the early 1900's the American Bison is still around.
This event fascinated me so much because of the dramatic change in population in such a short period of time. The fact that the American Bison exists today is truly a wonder after the slaughter of so many. Even though most of the bison in the wild today are the result of hybridization, it gives me comfort in knowing that someone along the way realized that what was happening to these animals was wrong, and they needed to be saved. I often wonder what the ecological effects of this event have been. Losing almost 60 millions animals in a population is a drastic change to an ecosystem.