A Baby Was Born With DNA From 3 People. Here's How That’s Possible

In an article by Alice Park, “A Baby Was Born With DNA From 3 People. Here's How That’s Possible”, she explains how it was possible for a thirty-two year old woman to give birth in Greece. The most miraculous part about the birth is that it occurred after she had many failed IVF treatments previously. Genetics explains how this was possible.
The technique utilized by the Institute of Life in Athens is known as Maternal Spindle Transfer. Very much is still unknown, so the method is not currently allowed to be practiced in the United States. Maternal Spindle Transfer takes DNA from the mother’s egg and puts it into the donor egg of a different woman. The donor egg is first emptied of its own DNA. Then, the egg with the actual mother’s genes is allowed to be fertilized and such. 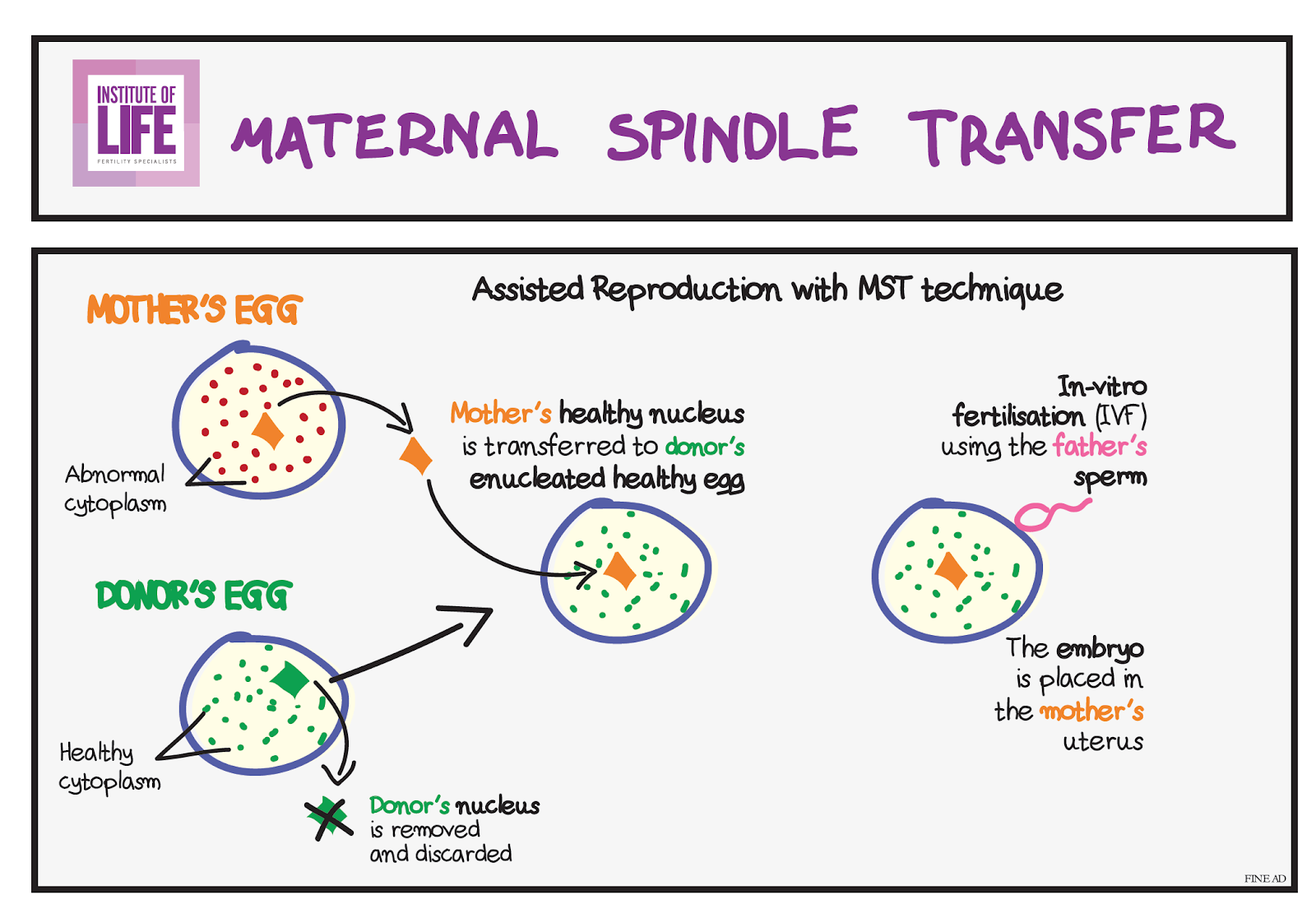 Above is an image of how the transfer works. Image is provided by the Institute of Life.

Research has shown the method to be a viable option for mothers with mitochondrial diseases. Because the mother’s DNA is placed into another egg, it is able to be taken care of by the new egg’s mitochondria. So, women with problems with their own mitochondria are able to use those of another egg.
In the most recent birth, the mother did not actually have a mitochondrial disease. The success that unfolded leads researchers to believe that the mitochondria may play an even more vital role in reproduction than previously thought. In fact, a new study, “How egg cells choose their best powerhouses to pass on”, done in fruit flies by researchers at NYU and the University of Toronto looks more into the importance of mitochondria. Their tests actually reveal that the cell works hard to make sure that the best mitochondria are passed on. Because the cell works so hard to weed out “bad” mitochondria, it implies that having healthy and functioning mitochondria is vital for reproduction.
It is amazing that this woman was able to give birth. However, he will become studied very closely throughout his life, because he actually has the DNA of three parents. The explanation for this seemingly impossible situation comes from the intriguing mitochondria. Since the mitochondria has its own DNA, now the baby has DNA from the mother, the mitochondria in the donor egg, and the father.


I had never previously thought about how important the mitochondria was in reproduction. It makes perfect sense seeing as the mitochondria is constantly referred to as the powerhouse of the cell. If the powerhouse is not functioning properly, how is the cell meant to work half as well? Even more intriguing is the circular DNA in the mitochondria. Through the theory of endosymbiosis, we have learned that the mitochondria was engulfed containing its own DNA. The recent birth of a child with mitochondria different from the mother could hold answers on a very interesting topic facing the field of science. In genetics, our genome seems to hold our own personal blueprint. While a lot of it is similar, even a single difference holds the power to create a whole new individual. I am very curious to see how having donor mitochondria will interact. Regardless, it is truly impressive that this was even able to happen in the first place.