The cultivation of sea grapes, or Caulerpa lentillifera, is popular within the Okinawa prefecture of Japan. This crop is being increasingly grown due to its prevalence in Japanese cuisine, but farmers often have difficulty with growing it. However, the recent sequencing of its genome could provide new insight on the the genes that stimulate growth and development.


C. lentillifera is a unicellular green algae, but scientists were unsure of how it is possible for this unicellular plant to have such complicated segments. However, by studying the sequenced genome, Okinawa researchers were able to understand that the presence of homeobox genes, or genes that allow for the development of segmented body parts. In addition, the presence of genes that code for nuclear transport regulators led the scientists to understand that the different clusters on this algae are created because of these proteins. They allow for the different segments of the algae to almost act like different cells, as the proteins function in a way similar to cell membranes. With this new understanding of the way that this type of green algae develops, it may be possible to more efficiently grow them, and also to suppress the growth of similar, unwanted algae that are often found around sea grape farms.


Few fully sequenced genomes of algae, specifically green algae, exist but there are numerous reasons to invest in this knowledge. One example would be to better understand the development of algae that can be used to form biofuels. With a more thorough knowledge of what helps them grow, they can be cultivated and harvested more efficiently, which could lead to more progress in creating renewable energy sources. 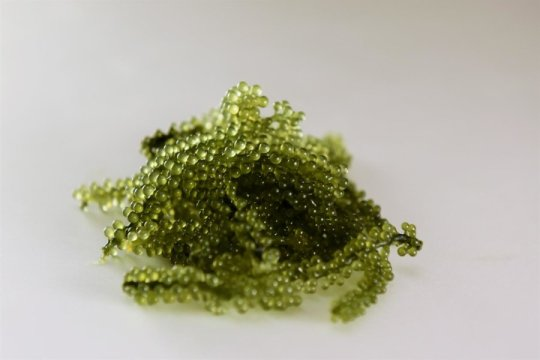