There are parts of the world in which people aren’t used to seeing that many diseases bring up the death count but in those parts that it does, these diseases can take a toll on anyone and their family to the highest degree. In this article by the Science Daily they go into detail on a new experiment in which they try to treat lethal diseases with gene therapy. They state that there is a rare life threatening disease called X-SCID in which these infants aren’t able to have their immune system function properly which means that they aren’t able to fight off any diseases when they come into the world. And as being an infant and being restricted to things that an adult wouldn’t be it would be much harder for an infant to survive and this rate. It was stated that they did clinical trials on 8 infants and that this experiments were showing great improvements to their health and to further research. In researches like this the idea of CRISPR would be very beneficial due its prowess in gene modifying as stated in this article. 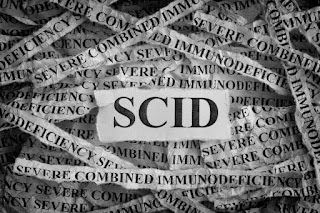 (Link to image)
Posted by Alvaro Ferreira at 9:16 PM