A Newly Found Species is an Extension of the Human Lineage

In an article by Live Sceince, an extinct lineage that lived in New Guinea interbred with modern humans called Homo luzonensis. This new addition to the human family tree was discovered in a cave in the Philippines. This extinct lineage lived on what is now the island of Luzon around 50,000 years ago. Scientists believe that they stood less than three feet tall, making them the smallest out of all the extinct Homo lineages. They had extremely small teeth and had three roots, unlike our teeth which have one root. They also only had one toe bone, unlike the three toes bones we have.  This discovery adds new complexity to the story of human evolution. According to Times Magazine, it is possible that there may be many other lineages that are still unknown in New Guinea. This discovery may just be the beginning on the completion of the human lineage. The picture below is the cave where Homo luzonensis was discovered in New Guinea. 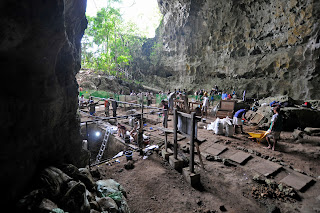