Mystery on the Canary Islands

For many years, the mystery of how the indigenous people arrived on the Canary Islands before European settlers were unknown. The debate over when and why the canary islands were first populated initially arose by Europeans in the 1400s. Records indicated that the Canarians had no navigational skills. This led scholars to wonder how the Canarians even reached the islands. Were they brought by the Romans or perhaps sailed there themselves? Because the language and culture of the indigenous people were lost after European colonization, it has been especially difficult to learn about the past of the Canary Islands. To investigate, Dr. Fregel and her colleagues collected almost 50 mitochondrial DNA genomes from remains at 25 different sites. Most of the cites were radiocarbon dated 150 and 1400 C.E. Results showed North African, Mediterranean, and some sub-Saharan African lineages.  This fit with the genetic history of North Africa. The analysis also showed that the islands didn't have much diversity, where others had a great deal of diversity. This indicated that these ancient populations must have been large. Researchers found lineages that were known only from parts of North Africa and Europe. As well as four new lineages exclusive to Gran Canaria and two eastern islands. Dr. Fregel proposed that this might mean colonization happened in at least two phases with the second wave of migration only on islands closer to the African continent. Even though this evidence did not show how the Canarians arrived on the island, they were able to discover where they may have originated from. 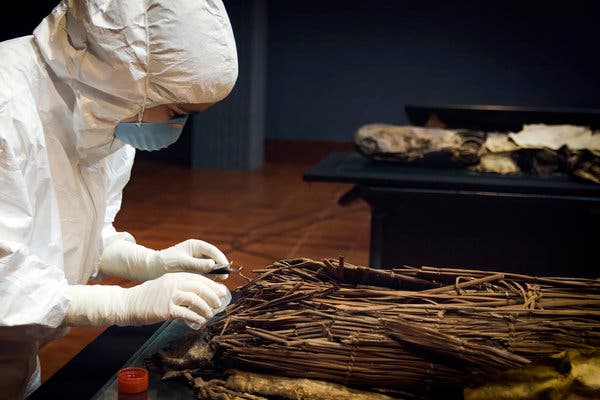 https://www.nytimes.com/2019/03/21/science/canary-islands-indigenous-dna.html
Samples being collected from mummified remains at El Museo Canario in the Canary Islands.

I found this article really interesting and amazing that the researchers were able to study a remains dated all the way back to 150-1400 C.E. Mitochondrial DNA can tell us a lot of valuable information about the past that can then be used for many things science or health-related in the future!
Posted by Meg Schaeffer at 7:09 PM