Amino Acid role in the Fight Against Coral Bleaching 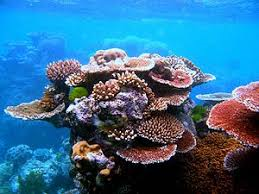 Global warming is becoming a larger threat year after year. The damages that have be dealt by the heat is starting to become irreversible. This is especially true to the wild life at sea because many aquatic animals are adapted to a certain temperature, but the ocean temperatures are slowly rising. Corals in this case have an extremely hard time because they have very specific temperature needs but are dying due to the heat. The great barrier reef for example is nearly gone because of global warming. However, this article states that recent scientists have discovered "robust" corals. Normal corals can only produce 11 out of the 20 amino acids while requiring the 9 essential remaining ones to be collected for them by symbiodinium. Corals also have a specificity on what symbiodinium it coexists with as well. However, a robust coral can make 11 amino acids but it can also make 1 essential amino acid without the help of a symbiodinium meaning that it can potentially survive bleaching. Not only that, the robust corals do not really mind what symbiodinum it coexists with. This could mean big things because if we can potentially do something with the amino acid a coral can naturally make, it is possible to give it a symbiodinium who can help it resist against bleaching while not giving any adverse effects to the health of the coral itself.
Posted by Tommy Nguyen at 9:55 AM