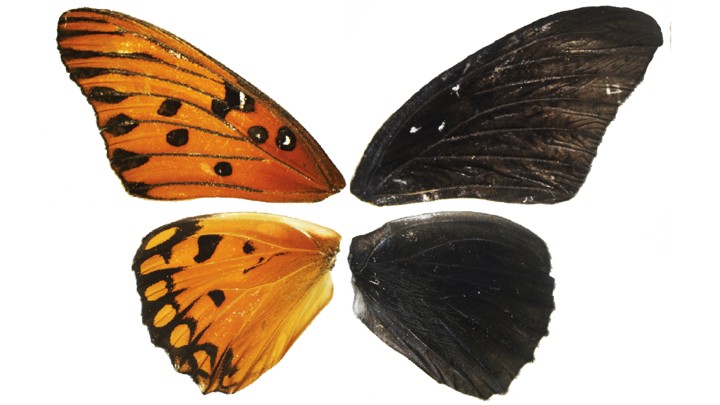 This study is focused around Heliconius butterflies, which are very colorful and live in the tropical regions of central and south America. They often have wing colors that mimic those of other species to ward off their predators. One particular species, Heliconius Cydno, was studied by the University of Chicago, and found to have only one gene controlling whether the butterfly has yellow or white spots on its wings. The researchers created a genetic map using both yellow and white butterflies of this species. They continued to study the various genome sequences to eventually identify a single gene entitled aristaless1. This is the gene they determined was responsible for the switching of colors. If a butterfly had white spots, they had an elevated expression of al1 or it is repressing the yellow pigmentation. When they used the CRISPR gene editing tools they confirmed that when the al1 gene is turned off in embryos of butterflies that should be white, they end up developing yellow spots.

That is just that species, however. A team at Cornell University are finding a way to "repaint" butterfly wings by using CRISPR and deleting a single gene. A gene called optix is shown to control the patterns of a butterfly's wing. With the knowledge of this gene, scientists can edit and manipulate a butterfly's genetic sequence so that their color pigments show up differently. Scientists are still inquiring why these certain genes play the important roles that they do in color pigmentation. When the genes came about, why there are are only so few of them, and did natural selection and evolution play a role in development of the genes? I believe that the use of CRISPR and the discovery that this gene manipulation could be done in butterflies is interesting because scientists could change the way an organism looks by changing one small gene. More than that though, it gives researchers more of a chance to answer their questions about the development on how different species of butterflies got their specific wing colors and patterns.
Posted by Jenna Dizinno at 5:50 PM