2018 Nobel Prize Winners for Their Work with Proteins and Enzymes 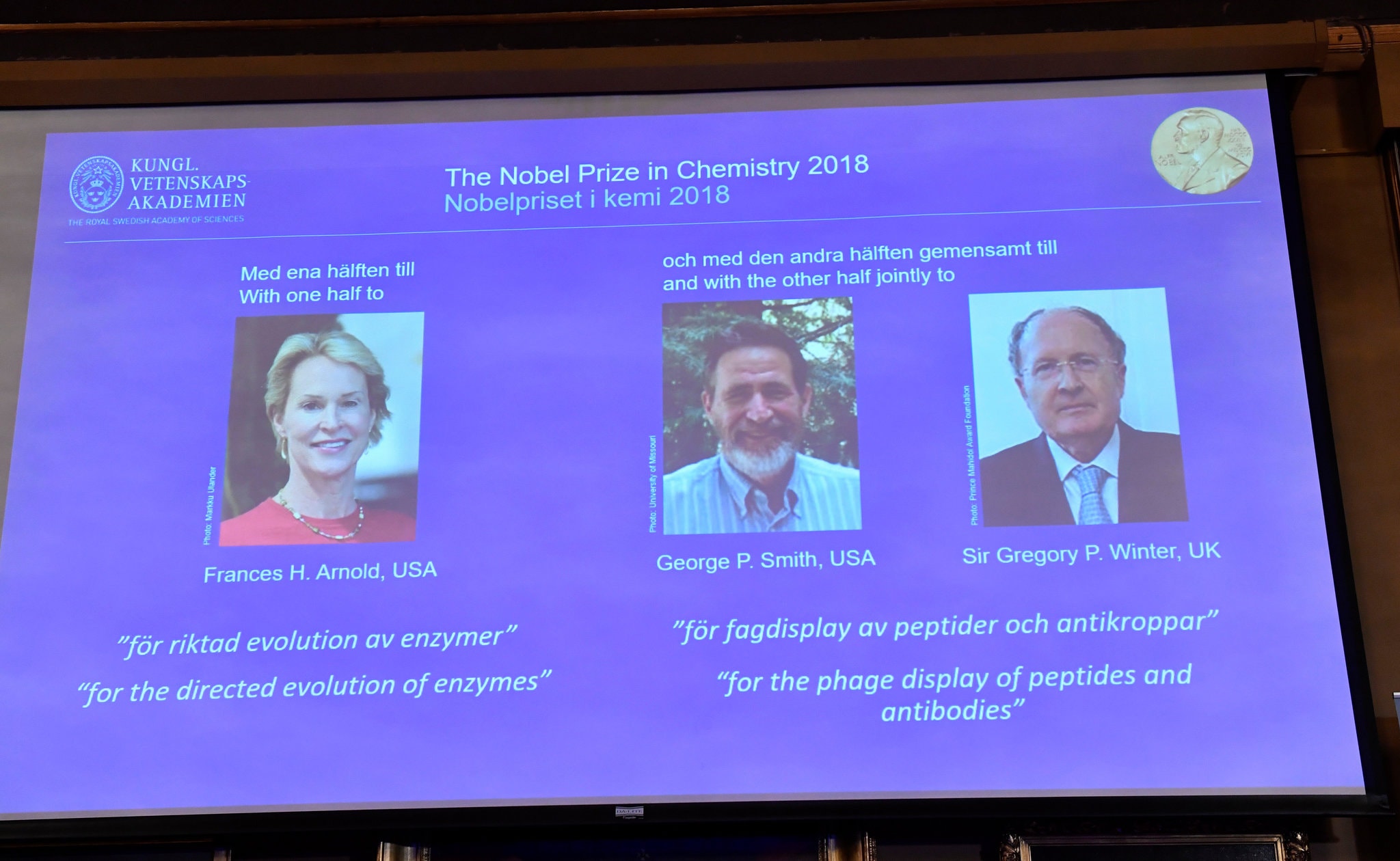 Last week was a momentous occasion for many people in the field of research, as the Nobel's Prizes for each category were announced. Many people waited and watched, riddled with anticipation, as each winner was announced, and by Monday there were a grand total 12 Nobel Laureates recognized for their outstanding achievements. Among the 12 Nobel prize winners, there were 3 laureates of particular interest that contributed further to the knowledge and understanding of biology and genetic evolution.
Dr. Frances H. Arnold was the first Nobel laureate to be recognized for her work with directed evolution of enzymes. Dr. Arnold pioneered the first bio-engineering method in 1990 called directed evolution. Directed evolution is a method that introduces random mutations into a gene, which is then inserted into an enzyme and is used as a template to produce a catalyst for desired reactions. Directed evolution has been used to produce chemicals that are safer for people as well as the environment. Chemicals such as bio-fuels, medicine, laundry detergents and more have been created using this process. Dr. Arnold has used evolution to her advantage and in an article in the NY Times she stated "I copied nature’s inventions, this wonderful process of evolution, to breed molecules like you breed cats and dogs.”

Dr. George P. Smith and Sir Gregory P. Winters shared the 2018 Nobel Prize with Dr. Arnold for their work with bacteriophages. Dr. Smith, from University of Missouri, was looking to identify unknown genes using peptides and bacteriophages. In order to identify the unknown genes, Dr. Smith would insert genes into bacteriophages, which would then express the protein on the surface. Dr. Smith watched these antibodies to see if they would interacted with the proteins and identifying them as a pathogen. The different types of antibodies only fit specific types of proteins, and once an antibody identifies a protein, scientists can then deduce the identity of the unknown gene.
Sir Gregory P. Winters, from MRC Laboratory of Molecular Biology UK, went a step further and used Dr. Smith's research to produce more efficient and prolific antibodies. Instead of inserting an unknown gene into a bacteriaphage, Dr. Winters inserted the bacteriapages with antibodies and selected the ones that bound the most effectively. He then repeated the process several times to produce powerful disease fighting antibodies. According to the NY Times, "the first antibody drug developed this way, adalimumab, which is sold under the brand name Humira" (Chang, 2018). This drug was used to fight diseases like rheumatoid arthritis, psoriasis and inflammatory bowl disease. In addition to his drug synthesis, Dr. Winter also used this technique to produce efficient antibodies that could shrink tumors in the human body. In order to do this, Dr. Winter tweaked a mouse antibody, using the same technique, and injected that antibody into a patient with a deadly tumor. The tumor shrank successfully and the patient suffered from no side effects. The shrunken tumor was the first ever human test to see if this procedure could be used for the public health.
Posted by Unknown at 8:27 PM