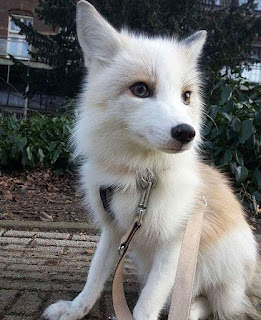 Normally when someone thinks of a fox they picture an aggressive canine, and not a cuddly pet.  However studies have shown that certain genes can allow the species to behave in a non-aggressive and friendly manner.  A study done took the most "docile" of a group of foxes and began to breed them, eventually creating a generation of foxes that were friendly and very receptive to humans.  The study also bred a group of very aggressive foxes and a group that fell somewhere in the middle.  After this, a reference genome was made and was used to sequence genomes for tamed, aggressive and conventional foxes.  Through this the scientists were able to identify the most varied genes throughout each group of foxes and most of these genes were related to behavior and immune functions.  The SorCS1 gene which is known to be associated with human behavioral disorders stood out the most and is the most significant in explaining artificial selection. The scientists tested this gene in relation to the foxes behavior and found that whatever version of the SorCS1 gene was present in the foxes was varied by how they behaved.  While there are very strong relations to how a fox behaves and what types of genes they have or how they can be bred using certain genes, nothing is completely certain because working with genes is very challenging. The article states that, "The team found success in identifying and studying SorCS1 in depth, but 'we do not expect that we can identify all individual genes through this comparison." While this breeding is very interesting and seems to be successful, it is still extremely complicated to study and use the specific genes.