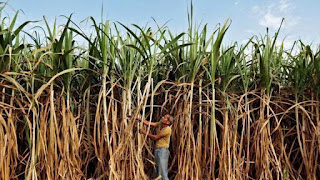 Sugarcane lines have been known for having constraints on culm development. This means that the sugar’s storage capacity is physically limited, restricting the volume of sucrose and biomass produced. However, a study performed by the Bioenergy Research Program has discovered the gene ScGAI that place an important role in regulating culm development in sugarcane. ScGAI mediates the regulation of developmental hormones such as ethylene and gibberellins. Both hormones are used by sugarcane farmers to accelerate sugarcane ripening by degrading the plants’ DELLA proteins. In some lines, the ScGAI gene is silenced and has resulted in taller and richer plants. “The study shows that the ScGAI gene is a fundamental component of sugarcane development and can be a target for genetic manipulation to permit intervention in the speed of plant growth by regulating DELLA proteins”.


The researchers next step are to move this experiment and produce field tests to see if they can mimic the same results as they did inside the greenhouse. This article relates greatly to the video shown in class ‘Food Evolution’. With the production of ScGAI-rich sugarcane plants, farmers would be able to cut back on adding hormones such as ethylene and gibberellins and still produce the same results.
Article link
Related article