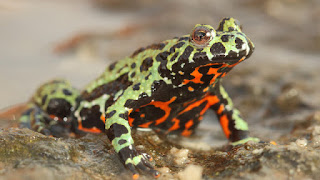 Amphibians have fallen victim to a deadly skin infection, Chytridiomycosis, that can cause osmotic imbalance, organ failure, and even death since 1998. This infection has been the root cause of die-offs and extinctions of a variety of amphibian species. The origin of the fungus has been unknown, as is the cause of the fungus becoming such a threat to amphibian species. The fungus causing Chytridiomycosis is called Batrachochytrium dendronatidis. Researchers analyzed hundreds of B. dendronatidis samples from all over the world and concluded that the fungus most likely came from East Asia, originating in the beginning of the 20th century.

Discovering the origin of  B. dendronatidis is particularly interesting, and hopefully will allow researchers to learn more about what triggers these math die-off and extinction events. Learning more about the favorable growth conditions could prevent the fungi from overtaking and claiming more amphibian lives.