In the past 7 million years human brain size has tripled.  Recently a group of researchers from several different institutions have began studies looking at microcephaly. Microcephaly is the "abnormal smallness of the head, a congenital condition associated with incomplete brain development." It is often genetic and has recently been linked to the Zika virus. There is little known about how and why the incomplete brain development occurs. This is due to the fact that there has not been a good model to explore these questions.

The gene involved in microcephaly codes for a protein called Aspm. When the gene is mutated it results in a humans brain being half the size of what is normal. Mice could not be a model for this study because when mutating the gene their brains only decrease by one tenth, which is not comparable with the effects it has on humans. The researchers then tried using ferrets as a model. 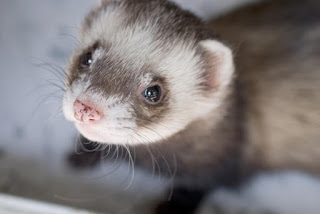 With Aspm knockout ferrets' it resulted in their brain size decreasing by 40 percent. This result was much closer to how humans are affected and the results were able to be compared for further questions. Such as back to the main question, why do humans have such large brains. They found that when Aspm is not present it results in the radial glial cells to detach from the ventricles more readily and then they migrated early. Because of this the timing changed and lead to fewer nerve cells in the cortex. Since Aspm regulates the number of cortical neurons it alters brain development by not allowing centrioles to do their job in cell division.

The result of altering this gene is that the "radial glial cells' migration can be altered and the cortex can grow larger." The results from these studies are that they discovered a new model organism for microcephaly, ferrets. As well as that it provided insight into the origin of the brain bulging. In my opinion these findings are important. Now they can find more answers to questions other researchers may have about microcephaly. Before there were many unanswered questions regarding the disorder because of the lack of a model. Finding out more about disorders that cause incomplete brain development could possibly come from using ferrets as models, since the effects they had were very similar to those of humans. This study was interesting and showed the importance of taking the time to find a good model for scientific studies.
Link to Article:
https://www.medicalnewstoday.com/articles/321488.php
Link to more information
https://www.nature.com/articles/s41586-018-0035-0
https://www.medicalnewstoday.com/articles/305880.php
Posted by Unknown at 1:49 AM