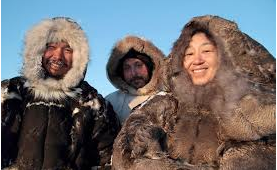 The Denisovans are a group of archaic humans that survived in harsh climates for thousands of years. Around 50,000 years ago they bred with modern humans and subsequently passed along some of their genetic code. There are still some descendants from this mix today and can be found in Greenland, South America, and East Asia. While prevalent in other places, 100% of the Inuit population of Greenland have Denisovans as common ancestors. This suggests that a certain gene passed from the Denisovans was naturally selected and ended up being the most beneficial for the environment.

The Inuit people live in a climate where the average temperature is below freezing for half the year. They survive off of a diet high in whales, seals, fish which are all very high in unsaturated fatty acids. In order to be able to live in these conditions, they have developed heat-generating body fat or brown fat that produces heat by burning calories. This not only helps them keep warm in subzero temperatures, it also helps them metabolize their high fatty diet.These traits would easily put the Inuit people at an advantage if there were to ever be another Ice Age.