Genetics Linked to Vunerablility of SIDS 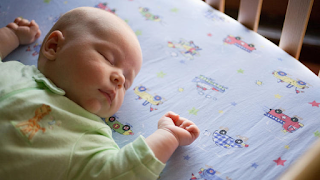 A recent study performed looked into if the genetics of an infant influenced their chances of succumbing to sudden infant death syndrome (SIDS or crib death). The study showed a link between SIDS and a genetics mutation involving SCN4A, which leads to impairment of the muscles involved in breathing. The study involved 278 infants who died of SIDS and 729 other who acted as the control. While the mutated SCN4A was linked to SIDS it was only found in four of the affected individuals and was not cited as the cause of SIDS (which is believed to be caused by multiple factors). Unfortunately the study did not go into minorities as all involved individuals were white and hailed from Europe.
SIDS is a frightening concept, due to both its unexpected nature and unexplainable cause; if we are able to know via genetics if an infant is more susceptible or not then more caution can be taken with the child.
Posted by Unknown at 5:07 PM