Over the past years, the genetic modification of salmon for commercial use has been steadily decreasing as less salmon is being caught along the Pacific Northwest. Apart from their general population decline, the past 7000 years has shown a 2/3 decrease in genetic diversity, compared to bones of the same Salmon found in Native American archaeological sites. Such a loss in diversity is detrimental to such a valuable and rich food source. Genetic diversity allows for the different characteristics in the salmon we eat, and helps to control GMO salmon from the natural Chinook Salmon. A possible cause for such a low diversity comes from the numerous man made structures that hinder the natural process for many Chinook Salmon. Dams cover off many potential spawning habitats from ocean Chinook Salmon, thus creating some inbreeding for the fish already located in the rivers and oceans.

Genetic Diversity helps to create more variations in offspring and allows for natural adaptations to occur. Without a growing population the Salmon can be susceptible to a loss in genetic diversity and thus a loss in adaptation and variation. Conservations have been made restore the flow of diversity back into the Salmon, but the damage may be far from repairable. 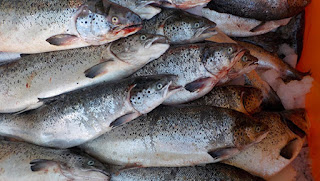