How Did Insects Get Their Wings? 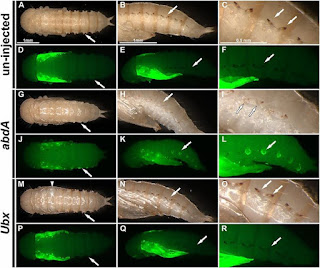 Insects were the first organisms on the planet to have the ability to exploit particular environments to aid in their survival. It has been a mystery on to how these creatures developed their ability to fly and there has long been two hypothesis onto how wings came about. The "tergal hypothesis," suggests that the wings developed from the top of the insect body wall and formed gliding membranes while the, "pleural hypothesis," suggests that wings developed from ancient leg segments that originally merged with the body before ending up on the back. Now with the advancing developments in evolutionary biology, researchers are now suggesting a, "dual origin," hypothesis where wings fused from two separate tissues: the dorsal body wall and leg segments.

Dr. Tomoyasu and David Linz, two researchers, recently published in the National Academy of Sciences, were able to genetically engineer beetle larvae with an additional pair of wings on their abdomens. By injecting green fluorescent proteins into beetle larvae they were able to mark genes that expressed wing development. With these particular genes exploited, the researchers were then able to develop larvae with an additional set of wings on their abdomen. This result may suggest that insects may have originally had three sets of wings and lost a pair due to the possible loss in aerodynamics throughout natural selection. However, this data is just a fraction on what is needed to confirm how insects truly gained their ability to fly.