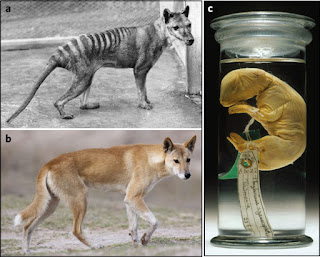 Tasmanian Tigers were in poor genetic long before human drove them into extinction. A new DNA study  shows how and why. Biologist began by starting with the source, the genetic history the Tasmanian tiger. The biologist then extracted and analyzed the DNA of a pup that has been perceived for more than  a  century. The genome reported as one of the DNA of any extinct animal. It was not easy for the biologist to piece this together for DNA has a habit for falling apart.
The preserved DNA of the pup  was stored in ethanol reasons why it did not degrade as much as other preserving fluids. From the analysis  of the genome it showed that even before  the human arrived  there was  lack of variation in the genetic  of those Tasmanian tigers. When it comes to evolution genetic variation and diversity plays a very important role in a specie;s survival Since there was a lack of variation the tigers declined in their history.  I found this article very interesting because I learned and always heard about how the lack of genetic variation leads to extinction but after reading this article I now have evidence that it is true, you need to be in a good genetic shape to evolve not go into a demography of an extinct animal.