People-sized penguins used to waddle around the arctic 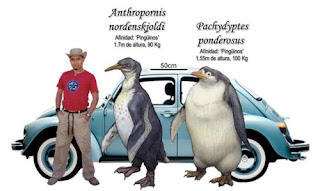 At roughly 6 foot and up to 220 pounds, massive flightless birds were early marine predators at a time when there as limited competition. Until recently, it was thought that it was possible that penguins had only one-shared origin of gigantism. Until this discovery, it was believed that all other giant penguins of the past had evolved that trait together, and it was lost just the same. This discovery, of several bone fragments in New Zealand, changes the possibility of that idea. The fossils found, were actually the oldest penguin fossils found to date, and they eliminate the possibility that gigantism was an isolated event. In a further examination of the evolutionary tree, it was found that both the species found recently (Kumimanu) and a smaller species (Waimanu) were part of an extinct branch of the penguin. The 17 species alive today are part of a much younger branch. The extinct birds had much longer, stork-like beaks and slightly more flex in their wings (see picture in bottom left- Waimanu)
It is believed that penguins began to emerge at the time of the mass extinction. As many of the land animals and larger predators began to die off, the surviving feathered dinosaurs had to search for food elsewhere. The elimination of most larger marine predators left an open window for early penguins, and as a predator, size is usually beneficial. The birds could fully adapt to catching prey underwater with very little fear. With the emergence of marine mammals however, that would change. Larger marine mammals like whales would have hunted some of the larger birds while, on land, the larger penguins would run out of room. Because both mammals (like seals) and the birds use dry land to rest and raise their young, the larger birds would have been pushed away, while smaller ones could continue to coexist.
This idea makes sense, but it does not explain one thing. If larger birds evolved in a window of low competition, and then were driven out, why has gigantism appeared in multiple species among different points of the path? This hypothesis fails to account for several species which are actually much more related to modern penguins. And finally, if gigantism can evolve at individual and unrelated points, why are there no larger penguins waddling around today? 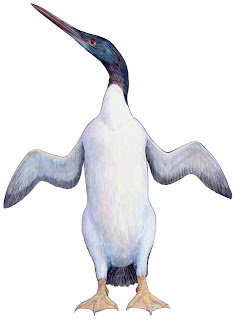 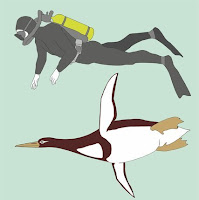 the Waimanu (left) was about the height of the modern emperor with many of traits of the giant Kumimanu like the stork-like beak and bent, non blade-like wings