Got Peanut Allergies? There's genes for it. 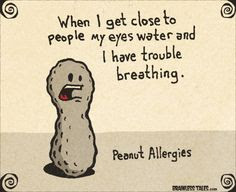 There are many life-threatening allergic reactions that affected people get when they are in the presence of a peanut. Reactions like anaphylaxis can lead to death for many, which is why research is being done to understand how and why these reactions occur.  In the first ever human trial for peanut allergy, Science Daily reports that there are six genes that "activate hundreds of other genes in children experiencing severe allergic reactions to peanuts." This is also the first study that monitors the gene expression of the children before, during, and after they have ingested the peanut. Instead of using children who do not have allergies as controls, this gives researchers a more detailed "picture" of what is happening at a genetic and molecular viewpoint. The researchers collected blood samples from 40 peanut-allergic children throughout the experiment. Subjects ingested the peanut at 20-minute intervals until an allergic reaction occurred or until 1.044 grams of peanut was ingested. Using the same protocol on a different day, the same subjects ingested incremental doses of placebo oat powder. RNA sequencing was done on the blood samples followed by computational data analyses to determine what genes and cells were activated and driving these allergic reactions.

I personally have noticed that there has been an increasing number of peanut allergies around me. Whenever I visit my elementary school, I notice that on almost every classroom door there is a sign that reads, "No Peanuts Allowed!" I only remember there only being two or three classes with that sign up when I attended the school before. I feel that this research has given other researches invaluable information on peanut allergies that has not been accessible in the past. While the EpiPen might be a temporary solution for people who endure these life-threatening reactions, there needs to be another solution that will give them long term relief.

https://www.foodallergy.org/common-allergens/peanut
Posted by Unknown at 5:07 PM