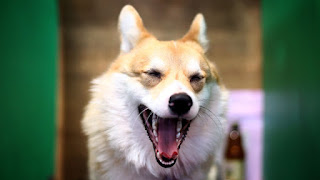 Scientists have pinpointed out that genetics has something to do with dogs being so friendly. Using clues from humans with genetic disorders that them unusually friendly. Some of the DNA in dogs link personality. A team confirmed that dogs are friendlier than wolves by comparing the behavior of 18 dogs; purebred  and mixed. Researchers then went to humans with Williams Bueren syndrome, a developmental disorder that leads to mental disorder but giving them an appearance that make the person look very trusting and friendly. This syndrome is due to the loss part of chromosome 7. Observations  showed that hypersocial dogs had more DNA disruption then more aloof wolves. The disruption on a gene from a protein called GTF21  which regulates the activity of other genes which associates with the most social dogs. The lack of changes in the gene leads to aloof wolflike behavior. In the article it goes to say how Humans too have high sociability relative to other primate. Humans and dogs use the same genes for these social behaviors. This study is still at work. For this research  to continue for they are looking for this gene behavior connection in other populations of dogs and more individuals. I found this article really interesting because I would not thought that dogs personalities had anything to do with their DNA. Even the fact that humans would have that same gene connection linking them together on a friendly wavelength.