Insect Based Diet- another reason

Many countries around the world have known that many different kinds of bugs are very useful as food. They are extremely easy and efficient to raise, and they are excellent sources of protein. Recent research shows that adding a specific insect to hens' diets can have large effects on their production of eggs. Two groups of hens were used. One group was given a soybean based diet, the other a insect based diet (specifically Hermetia illucens). H. illucens is exceptionally high in proteins and chitin. After a 21 week span, both groups were healthy, showing no signs of sickness or disease. The production of eggs, quantitatively, was unaltered. The hens given the insect diet, however, did show changes in the nutritional properties of the eggs. 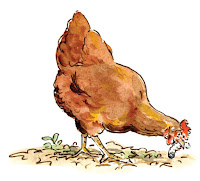 The first indication of change within the hens was a change in the cecal microbiota, or bacterial composition of the gut. The insect diet had developed different levels of certain bacterias. This makes sense because different bacteria can break down different things better than others. As a result of this, less obviously, metabolic functions were increased. Furthermore, the diet induced more diversity within the cecal microbiota. It is thought by some, that more diversity can have a symbiotic relationship with the host animal, making a healthier host. The increased metabolic functions of the microbiota has played a key role in breaking down of polysaccharides and increased production of short chain fatty acids.
Countries around the world already include insects in both their diet and the diets of their livestock. With their large amounts of protein compared to the energy, time and space needed to raise them, it is obvious why they would be incorporated into our diets. It leaves many wondering if it is time we join with those countries and change the way that we get many of our nutrients.