Groundbreaking skin patch the size of a penny can regrow organs, restore brain function, and heal wounds by injecting genetic code into the damaged area.

A groundbreaking new skin patch can heal wounds and even regrow damaged organs within days. The technology known as tissue nanotransfection (TNT), uses a nanochip about the size of a penny which is placed on the skin for about a second and removed. Upon placement of the nanochip, genetic code is injected into the cells turning them into any type of cell needed to restore wounded blood vessels with effects of the treatment seen within days. This was tested by the researchers at Ohio State University Wexner Medical center. The researchers restored brain function to mice after strokes and rescued badly injured legs on mice in just three weeks with a single touch of this device.

'It takes just a fraction of a second. You simply touch the chip to the wounded area, then remove it,' said lead investigator Dr Chandan Sen, director of the university's Center for Regenerative Medicine and Cell-Based Therapies.
'At that point, the cell reprogramming begin. "We reprogrammed their skin cells to become vascular cells,' Sen said. 'Within a week we began noticing the transformation.' Within a third week after this treatment, the mice's legs fully recovered.
The chip, loaded with specific genetic code or certain proteins, is placed on the skin, and a small electrical current creates channels in the tissue.
The DNA or RNA is injected into those channels where it takes root and begins to reprogram the cell. Because the technique uses a patient's own cells and does not depend on medication, researchers expect it to be approved for human trials within a year. 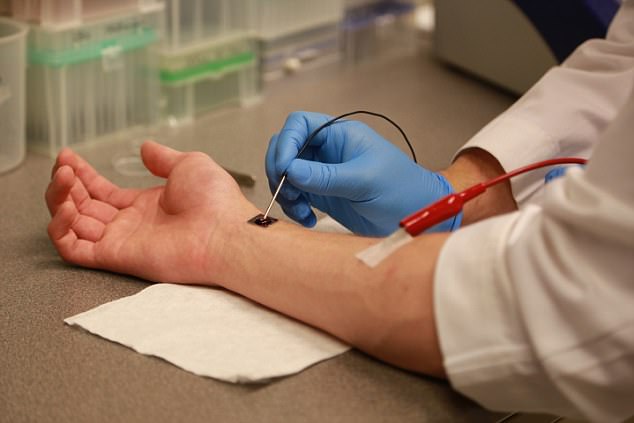