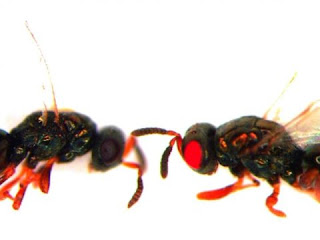 Scientists at UC Riverside were able to create a new red eyed mutant wasp, which in turn proves that CRISPR gene-slicing can be used on these wasps to study their biology.  One aspect of the wasps that scientists were looking at was their selfish genetic elements, which is the process by which males convert all their progeny into more males.  The process by which this is done isn't entirely understood, but it's thought that somehow the the male wasp can kill the female embryos and therefore produce only male progeny.  This is where the CRISPR technology comes into play as it allows scientists to inject RNA into an organisms to find, cut and mutate a certain piece of DNA.  They used CRISPR to locate and mutate the gene for eye pigmentation, thus creating a red eyed mutant.  The scientists hope that this technology can be used in the future to elaborate on their ability to understand the selfish genetic elements of these wasps.
Article
Journal Article