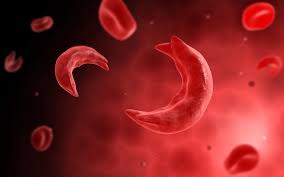 Sickle cell is a condition that causes life-threatening problems in childhood. The inheritance of just one copy of the mutation somehow protected people against a different threat to survival while having two copies is lethal. It was found that sickle cell is common for people who lived in areas where malaria is present. Children born with a single mutated hemoglobin gene does not cause major problems were somehow better able than their peers to fight off malaria and would survive to deliver the gene to their future children.


A molecule of hemoglobin is made up of four subunits: most commonly two identical proteins called alpha-globins and another pair of proteins known as beta-globins. Each of these subunits contains an iron-bearing structure which can grab on to or release a molecule of oxygen. Each hemoglobin can carry up to four oxygen molecules. Individuals who inherit a single sickle-cell mutation produce one defective and one normal beta-globin; those who inherit sickle-cell genes from both parents produce only defective beta-globins.

The only known cure for sickle-cell disease is bone marrow transplantation to provide a new circulatory system. There is another situation during development in the womb.
A fetus has a distinct kind of hemoglobin that binds very tightly to oxygen, allowing it to compete successfully with its mother's hemoglobin for oxygen in the placenta. The production of this fetal hemoglobin usually drops off, decreasing the amount of oxygen found in red blood cells. In a child who inherits the sickle-cell flaw from each parent, cells usually start to sickle several months after birth.