Calling all the Crown-of-Thorns 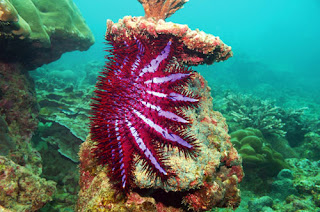 The Crown-of-Thorns Starfish is known as the "Demon Starfish"in Japan and with good reason these predators swarm coral reefs with their spawning events creating colonies with up to several million individuals which in turn devour the reef. This has become a huge environmental concern so efforts are being made to understand how it is that they communicate so efficiently to bring so many individuals together from Australia to Okinawa, and possibly control this invasive species. For this study researchers at University of the Sunshine Coast in Australia and the Okinawa Institute of Science and Technology teamed up and originally found that the starfish looked at in these two regions shared identical genetic material, meaning that the same species could be found 5000kms on the other side of the equator. The researchers then continued by identifying the water borne molecules the starfish used to communicate, then looking at genetic material that was decoded from two separate individuals from each region. In order to identify the genes collected they preformed an experiment where two Crown-of-Thorns were put in a Y-shaped aquatic maze at separate ends and fed the one at the shorter branch of the Y with water collected form an aggregation of the starfish, as the other one moved towards this branch they suspected that they could find the molecules in the water that induced the starfish to gather. The water was then analyzed and mapped to the starfishes genomic data, and they were able to confirm that the molecules originated from the Crown-of-Thorns because the scientists now had the full genome. Ultimately they exposed 26 specific genes that could take part of production of the 107 water borne communicating signals. The researchers also found that the genome included 750 genes that code for proteins connected to their version of a sense of smell. All of this information could help scientist potentially disrupt communication on a large scale to protect reefs and enforce biological control. I think this is important because it is an environmental issue considering how quickly coral reefs are diminishing and it gives more insight on evolutionary developmental biology.

Posted by Monica Martinez at 12:51 AM