Ancestral Climates May Have Shaped Your Nose 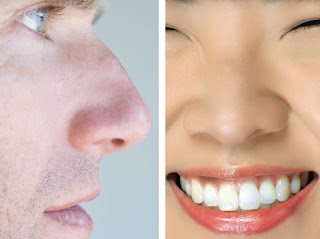 An interesting study has been done recently about how our nose shape could be mostly influenced by the climates where our ancestors lived. Our noses not only serve their obvious purposes for smell but in fact also work to warm and humidify the air we breathe in order to prevent damage to our lungs and limit illnesses. Dr. Arslan Zaidi from Penn State, along with several other of his colleagues looked at different traits beginning with  nose height, protrusions, and nostril width. They also looked at skin pigmentation and the height of men and women from the four different regions around the world where they were gathering participants from. The regions included West Africa, East Asia, Northern Europe and South Asia, each group had around 40 participants. It was found that people who's ancestors and parents came from warm or hotter climates tended to have wider nostrils, in comparison to those from cold, dryer climates tend to have narrow ones. They also found that in Northern Europeans this was extremely true and the particularly dry climates may have favored individuals with narrower nostrils.

It was also demonstrated that nose shape is a heritable trait. Dr. Zaidi and his colleagues demonstrated this by showing an association between shared genes and similarities in nose shape in large groups of individuals who were not related. In another article by The Guardian, nose shape is thought be influenced by GLI3, PAX, RUNX2, and DCHS2 genes. It is always interesting to learn about traits that are greatly influenced by the environment versus just your genes because it can often times be underestimated how big of a role environment places on human appearance compared to that of other animals. It is of course also always important to understand more about our general  anatomy and physiology.
https://www.theguardian.com/science/2016/may/19/scientists-sniff-out-genes-controlling-human-nose-shapes
https://www.nytimes.com/2017/03/16/science/ancestral-climates-may-have-shaped-your-nose.html?rref=collection%2Fcolumn%2Ftrilobites&action=click&contentCollection=science&region=stream&module=stream_unit&version=search&contentPlacement=2&pgtype=collection

Posted by Monica Martinez at 12:56 AM