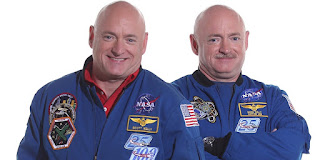 A study was done to understand how human genes would be affected outside of earth's environment. Identical twin astronauts were used as part of the experiment. One was monitored in space, and the other remained on earth. After 365 days, it was concluded that, no eminent physical change occurred in the one who travelled out of space but his genes altered; possibly due to the regular exercise, to prevent bones and muscles lost in the one out of space.