Rice is a world wide popular crop that has been facing more danger than we thought. Recently, rice has been going through what is called rice blast- a serious fungal disease that can destroy rice crops. The pathogen that is known to cause the disease is Magnaporthe oryzae. The symptoms shown that a rice plant has rice bast is usually lesions across the plant and even the roots. 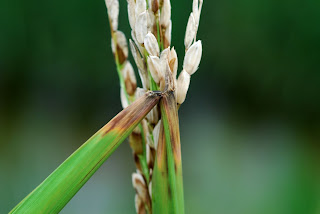 In the past, a set of rice genes were studied and was known to have a high resistance to fungus. Yiwen Deng studied the rice in much more depth and found that PigmR held a  high resistance to the rice blast. Deng noted that if the gene PigmR is expressed to the seedlings, it could resist against rice blast though out its whole system.

I have heard of rice blast before but never studied it in depth. As all plants can easily come across disease and its extremely hard to repair the plant after any kind of disease. Although were always one step closer to helping one organism, were always one step back again because these diseases change and we discover more. For the rice, it is incredibly interesting that researches have studied the genes of rice in deep depths and have found costless ways to help the rice blast problem.

Saving the Rice in a costless way
Rice Blast