Tibetan Mastiffs Can Survive Extreme Conditions Thanks to the Wolves

Tibetan mastiffs are a very interesting breed; they can survive in "thin, frigid mountain air," whereas most people and animals cannot. Researchers believe that they may have inherited this tolerance from breeding with wolves over 20,000 years ago. The "ancient" wolves were already able to live at heights like the mastiffs do now. Researchers also noted that Tibetan people have a trait similar to this from breeding with "Denisovans," which are a group of extinct humans. Researchers find this study very interesting because they are able to compare it to the changes in humans as well.

The study adds to growing evidence that such ancient mating events have sometimes played a vital role in the adaptation of modern species to their environments, the scientists say.

“It’s a very cool discovery … which turns out to be a mirror of what’s going on with the humans [there],” says Elaine Ostrander, a geneticist at the National Institutes of Health in Bethesda, Maryland, who was not involved with the study.


Researchers think that a dog breed from China traveled to the Tibetan Plateau about 24,000 ago. They adapted over this time to the icy climate, and formed into the hairy, large dogs we see today. In order to survive these temperatures, the dogs, along with the Tibetan people, produce less hemoglobin. Hemoglobin is the protein that carries oxygen in red blood cells. A variation of the gene, EPAS1, is what aids this adaptation. This variant helps reduce the chance of a clot or stroke when red blood cells try to make up for lack of oxygen. 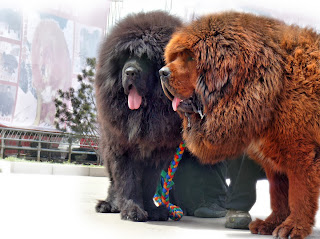 This is definitely a very interesting article. This study reveals how people and animals have adapted to live in more extreme clients. The fact that both humans and the mastiffs have similar variants of the gene is very extraordinary in the world of genetics.