A team of scientists led by the University of Birmingham has shown how a common mRNA modification, N6-methyladenosine (m6A), regulates gene expression to determine the sex of fruit flies.

The function of m6A, an mRNA modification known as the 'fifth nucleotide', has long been a mystery. But a new study, published today in Nature, has revealed that m6A plays a key role in the regulation of the Sex-lethal (Sxl) gene, which controls sex determination of the fruit fly Drosophila.
Sxl is a 'switch gene', meaning that Drosophila sex is determined by whether or not Sxl protein is made. The Sxl gene is transcribed into mRNA in both males and females, but through a process called 'alternative splicing' only the female mRNA can be made into a functional protein.

Alternative splicing is a widespread mechanism of gene expression and occurs in almost all human genes, allowing the synthesis of many more proteins than would be expected from the 20,000 protein-coding genes in our genome.

The new study shows that m6A mediates this process for Sxl in Drosophila, ultimately determining whether a fly develops as male or female. The findings offer an important insight into a classic textbook example of an essential and widely studied process.

'Despite sex determination being so fundamental, nature has found many ways of determining sex,' says Dr Matthias Soller from the School of Biosciences at the University of Birmingham and lead author on the paper. 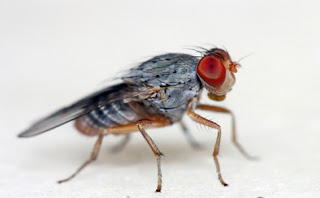 'Our study suggests that m6A-mediated adjustment of gene expression might be an ancient yet unexplored mechanism for the development of this diversity.'

The collaboration began after co-author Dr Rupert Fray's group at the University of Nottingham found that a plant enzyme required for putting the modified nucleotide into Arabidopsis mRNA interacted with the plant version of the Drosophila sex determination factor FEMALE-LETHAL(2)D.
'The revelation connecting m6A to Drosophila sex determination though came much later thanks to sensitive genetic interactions affecting the development of female flies,' Dr Soller explains.

The study also found that in addition to its role in determining the sex of somatic cells, Sxl regulation by m6A is required to initiate germline stem cell differentiation for developing eggs. Without this regulation, lack of Sxl expression in stem cells can result in the development of ovarian cancer.

'The reversible nature of the m6A methylmark adds a new layer to the regulation of gene expression now termed "epitranscriptomics" and warrants further research to establish links with human disease such as cancer,' adds Dr Irmgard Haussmann of Coventry University.