Rethinking Usage of Antibodies Against Cancer

After years of trying to use antibodies as the next big thing in cancer research, a new generation is going through drug trials. These new antibodies are called antibody-drug conjugates. These ADCs are different than past antibodies in that once they dock onto the cell, the cell cleaves the molecular links that bind the drug to the antibody, this frees the drug to kill the cell from within. Problems with these ADCs include not being able to penetrate deeply enough into the cell and being too unstable to release drugs into the cells and releasing them near healthy cells. Two drugs using ABCs have been approved to treat breast cancer and more than 40 others are now in clinical testing. 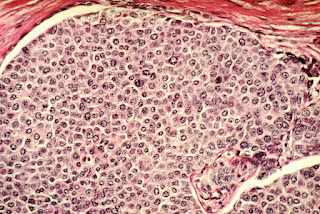 Other companies like Tarveda Therapeautics, a biotechnology company in Massachusetts, have bypassed the idea of antibodies and are now using short strands of amino acids to target cancer cells. This drug is much smaller than those using antibodies and likely to penetrate much deeper than antibody using drugs, solving one issue of ADCs.
Posted by Emily Casey at 12:34 PM