Earlier this month, Thomas K. Wood and his colleagues analyzed the first known toxin antitoxin system produced by E. coli in a biofilm. It is most unique because it is also the first system found to be dependent upon oxygen. The research conducted revealed that the antitoxin structure produced by the bacteria had passageways big enough to allow oxygen to flow through it. Toxin Hha and antitoxin TomB need oxygen to work. TomB, in conjunction with oxygen, oxidize Hha to wake up dormant bacteria after being stressed. 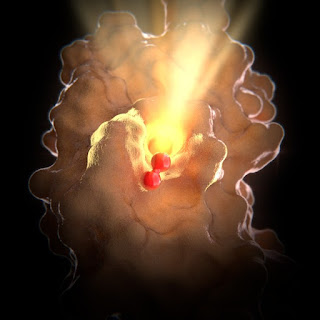 The research also reveals that only 10% oxygen is enough to awaken the bacteria, and using the oxygen passageways, an entire colony of bacteria can be manipulated into breaking up and dispersing biofilm so an actual antibiotic may be able to attack the active bacteria.

Although interesting, I did not entirely understand how this information can be applied into a human bacterial infection. Normal blood oxygen levels can be anywhere from 95-100%, so how would this knowledge be applied when prescribing an antibiotic treatment? It probably is more useful as prophylactic, to prevent biofilms from forming in the body all together to prevent bacteria from going dormant in order to cure an infection faster.