Getting Drunk on Genetics: A Link between the Liver and Brain

Man's fascination with alcohol has existed for thousands of years, and yet our current understanding of the inherited traits behind alcohol consumption is anything but large. Finding a gene or genes that help predict tendencies toward alcohol consumption can help lower cases of alcohol related deaths and diseases.

To find out more about genetic influences on alcohol consumption, a huge international team geared up to analyze over 100,000 individuals on their alcohol consumption, as well as genetics from genome-wide studies. What the team found was that a specific gene, β-Klotho, has an impact on an individual's tendency to desire and consume alcohol. Those with the "less common β-Klotho gene variant - present in about 40% of the participants - was tied to a lower desire to drink alcohol." 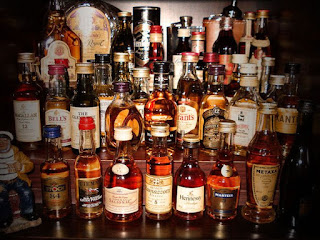 The team also looked at what the gene does in regards to the liver hormone FGF21. In normal mice, FGF21 reduces the preference of alcohol. However, in mice without β-Klotho, FGF21 had diminished effects on alcohol consumption. This shows a link between a negative feedback loop between a gene and a liver hormone, that could act on the brain to reduce consumption of alcohol.

The only drawback of the study is that it had analyzed non-addictive consumption, and future studies should focus on those with alcoholism in order to understand the extreme end of alcohol consumption, and hopefully find a link between genes and alcoholism.
Posted by Andrew Intelli at 8:53 PM