Often times the female in a species of an insect or spider tends to be larger than the male. This difference is attributed to the connection that the larger the female the more eggs it can produce. The orchid mantis is no exception to this difference in size between sexes, however the reason behind this difference might be the result of something other than an increase in the amount of eggs one can lay. It was discovered by Dr. Cleveland and some of his colleagues, who were looking at studies on mantis shape, DNA, and size of praying in order to revise their species classification and evolutionary history, that the orchid mantis was quite different from their close relatives. Instead of being small and camouflaged, the female orchid mantis was large and exhibited colors causing it stand out. 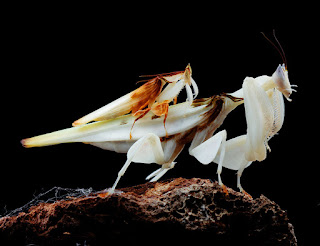 This was later attributed to the fact that these early relatives evolved so that they could blend in with flowers and then prey on any pollinators who came over, eventually leading individuals to evolve to flat out mimic the flowers, so they could attract pollinators directly to themselves. The females continued to evolve in this way, getting bigger and exhibiting colors that made them stand out, while males evolved differently, favoring a small size and a color scheme that enhanced camouflage. It is interesting to see how certain organisms differ depending on the sex of the individual. I especially enjoy that the differences between male and female orchid mantises don’t stop on appearance alone. They also live completely different lives. The females on one hand act as more effective predators, while the male move around eating whatever they can catch while looking for a female.