Y the Y Chromosome is not Vanishing

Despite receiving flak for being the smallest chromosome, the Y chromosome has also undergone significant dissection in the scientific community for showing degradation over millions of years, suggestions that future generations, centuries from now, may have a different sex determination process, as with a few species of spiny rats in Japan. However, recent research into the Y chromosome over time has shown relative stability within the last 25 million years. 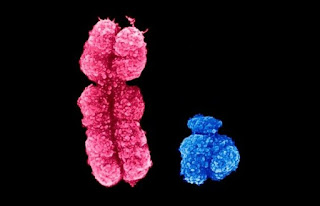 Above: A size comparison between the X and Y chromosome.

Further analysis of the Y chromosome from fossil records dating back hundreds of millions of years shows that the Y chromosome used to share about 600 genes with it's X counterpart, but now only has 19 in common with it. This may seem like a crisis, but since monkeys and humans split about 25 million years ago, the Y chromosome has been fairly stable, and this may be due to the elimination of unneeded genes. The existing ones on the Y chromosome, apart from sex determination, were shown by a research team led by Daniel Winston Bellott to play more broad roles in other organ systems. These genes help with protein synthesis and transcription, which suggests that the "survival of these genes would be favored by evolution."

Because of the importance of these genes, scientists believe that the Y chromosome may not undergo any more degradation, so men can rest easy knowing that future generations won't lose their short, stubby, but powerful Y chromosome.
Posted by Andrew Intelli at 9:13 PM