Stripes on Mammals: Where did they come from?

How does a zebra get its stripes? How does any mammal get their stripes? The answer may be found in a simple African mouse. Researchers have decided to study  the light and dark stripes on the African Mouse in an effort to figure out how other mammals have stripes.

Stripes on a mammal are not only for show; they can help in terms of survival and reproduction as well. Hopi Hoekstra, and evolutionary biologist at Harvard University, is part of this research. She believes that studying the stripes will uncover how genes can create patterns in mammals. The growth of pigment cells have already been studied in lab mice, however, this didn't lead to any findings on patterns. Hoekstra decided to study African mice, which have dark and light stripes running down their backs. 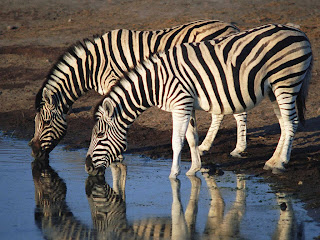 The researchers noticed that the pigment cells did not fully develop where light stripes were present. This was due to the gene Alx3 and how active it was. This gene was able to inhibit the protein that produces pigment, resulting in light stripes. After studying chipmunks, they also found that the Alx3 gene was present in their striped pattern as well.

"Because chipmunks and these mice are separated by 70 million years of evolution, Hoekstra and her colleagues think this gene may lead to stripes and other distinctive color patterns across the mammals."

Researchers believe that this gene also plays a role in the pattern of zebra stripes, as a study has shown that the gene is more active in the white stripes. More research on other striped animals will confirm the findings of the Alx3 gene.

This is a really interesting research project because it allows us to understand how animals are able to have such intricate patterns. It also will allow us to understand the evolution of patterns and how the gene can have so much influence on the appearance of the animal.

Posted by Meranda Cardona at 4:15 PM