Still No Drug to help Alzheimer's

Eli Lilly and Company have been experimenting with an Alzheimer's drug. It's goal was to slow down effects of Alzheimer's and the progression of loss of memory and thinking. Thinking it would ultimately work recent studies have came back proving its failure. 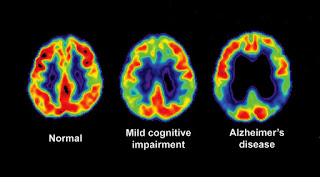 The drug is called Solanezumab. It is suppose to be given to people with mild dementia, detected it early to try and slow the rate as it persists. But it is shown that you can developing Alzheimer's well before you show any signs or symptoms. This therefore makes the drug even more ineffective because it wouldn't be right to give someone medication that may cause side effects if they may or may not have the disease because you can not totally tell that early on.

The failure of the drug does bring uprise to our general understanding of the theory of the disease now that it is ineffective and researchers are going to have to look into the reasons for the disease further more now such as the main reason of amyloid buildup, which is the build up of proteins in the brain that is how the development of Alzheimer's starts. Alzheimer is a very serious disease that has slowly been decreasing in numbers over the years thankfully but still is a big issue and not having any sort of medication to even at least slow down the disease is hard to grasp.