Snakes Used to Have Legs and Arms...Until These Mutations Happened 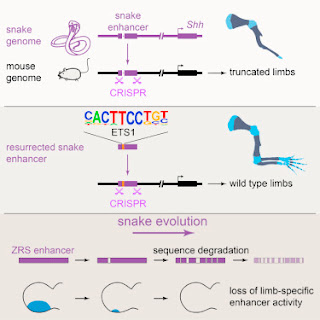 Snakes are limbless due to a mutation in a stretch of their DNA called the Zone of Polarizing Activity Regulatory Sequence (ZRS).  This zone contains the information required to make limbs for most vertebrates.  Scientists looked at the genomes of earlier snakes like the python and boa.  They have vestigial legs or bones embedded in the muscles.  Scientists also looked at "advanced" snakes which include the cobra and viper.  These snakes do not have any limb structures at all.  Scientists found that the Sonic Hedgehog gene, which is located in the ZRS and is responsible for embryonic limb development, had mutated in snakes.  To prove that mutations in the ZRS sequence was responsible for limb loss, scientists used CRISPR to eliminate the ZRS stretch of DNA in mice and then replaced it with the stretch from different types of snakes.  This resulted in mice with truncated limbs.  Researchers then looked at the ZRS section of a snake and found that it resulted from a deletion of 17 base pairs.  They fixed the sequence and then inserted it into mice embryos.  The limbs of the mice then grew like normal again.  Complications arose when attempting to insert the fixed sequence into python embryos.  Transcription of sonic hedgehog stops within a day of the egg being laid so the snake never develops legs.  However in the short amount of time that it exists initially, early development of a femur, tibia, and fibula occur.