In recent years, many treatments for cancer have involved using patients' own immune systems to fight cancer. A substantial part of these treatments have involved editing the genes of immune cells. Gene-editing has been very successful in fighting not only cancer, but other diseases as well. CRISPR-Cas9 is the most efficient and economical of all gene-editing tools currently being utilized. CRISPR-Cas9 contains a piece of RNA and an enzyme called Cas9, that together can "edit" or change DNA. The first clinical trial for humans, using the CRISPR gene-editing technique, was approved by a hospital ethics board in China this past summer. A team of scientists under the leadership of Lu You, an oncologist at Sichuan University, injected modified immune cells into a patient suffering from lung cancer. CRISPR-Cas9 was used to modify the immune cells of the patients blood, so that the cells attack the cancer by disabling a certain gene that codes for the protein PD-1. 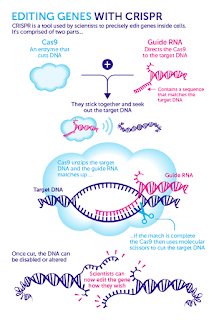 These clinical studies are extremely beneficial because if successful, they could provide us with insight as to how well modified immune cells can attack different kinds of cancers, while using a gene-editing technique that is more simple and efficient than others. This article states that the first clinical trial in China could initiate a sort of "biomedical duel" between China and the United States, as they often compete with each other in the advancement of all types of technology. The prospect of this "biomedical duel" is exciting because this type of competition may facilitate quicker progress in cancer treatment research. In the United States the first CRISPR clinical trial is expected to start in the beginning of 2017, as well as more clinical trials in China. I think that this type of progression gives hope to many cancer patients and other people suffering from diseases that could benefit from gene modification treatments.