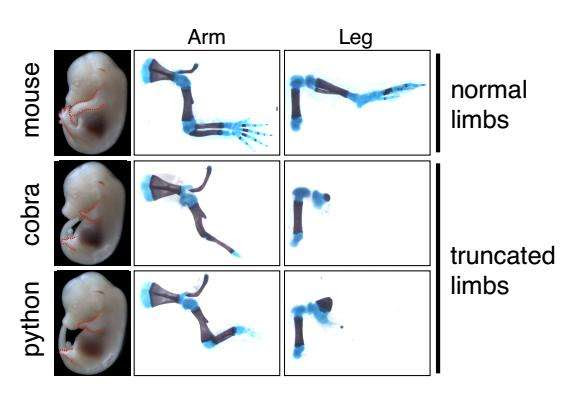 Martin Cohn ph.D. and ph.D. candidate Francisca Leal of the UF College of Medicine have discovered the exact genetic mutations that lead to the loss of legs in snakes. It took scrupulous  comparison of lizard and snake genomes and careful observation of the development of python embryos as well as the genetics of formation at each step to discern the cause. The creation of limbs in this case is inhibited by three key mutations on the enhancer of the so-called Sonic hedgehog gene (you can’t make this up). These mutations interact together and disrupt the coding for the transcription factor which then does not allow for the gene to be expressed, and thus no legs.
To confirm this sequence was the cause, CRISPR was used to insert bits of DNA from the ZRS (an area in Sonic Hedgehog the python exhibited mutations) from different mammals into mice. These mice had normal limb creation, but in the mice that got the python sequence added, no normal limbs formed (shown in figure above).
Such complete decay of the enhancer is evident in more evolutionary ‘advanced’ snakes like cobras and vipers while some others such as pythons have vestigial nubs where a leg would have formed if it were not for the Sonic hedgehog gene switching off due to the decay of its enhancer. Some scientists have hypothesized that other snakes have re-evolved legs and this discovery shows how it is possible that the snakes are still retaining the genetic machinery to do so. This is especially true in snakes like pythons whose Sonic Hedgehog genes are active for a short while before the enhancer decays. In addition based on Cohn and Leal’s genomic comparisons, they also believe these mutations likely occurred 100 million years ago (the Upper Cretaceous Period).