Should you let your dog lick your face?

It may seem harmless to let your dog greet you by licking your face, but experts say that dogs' mouths contain bacteria that can be very harmful to humans. Dr. Neilanjan Nandi from Drexel University College of Medicine explains how there are bacteria, viruses, and yeast in a dog's saliva, some of which help it clean and heal its own wounds, but many can prove dangerous to us. Our bodies are simply not made to combat or come in contact with these bacteria. Some of the bacteria such as E. coli, salmonella, and clostridium, are zoonotic, meaning they can be transferred to humans and cause disease. However, this doesn't necessarily mean that you can never let your dog lick your face. Dr. Leni K. Kaplan of Cornell University's College of Veterinary Medicine explains that it is highly unlikely that dog saliva will cause any problems when it comes in contact with a healthy person's skin, as there will be little absorption through the skin, however, pathogens are much more easily absorbed through the membranes of a person's eyes, mouth, and nose, so it is best to avoid letting your dog lick those areas of the face. 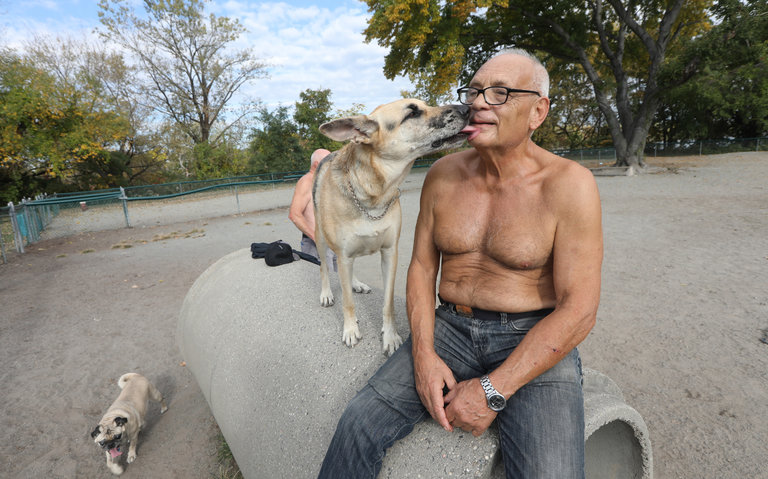 Infections like hookworm and roundworm can also be transmitted by coprophagia. A puppy can have as many as 20 to 30 million roundworm eggs in its intestinal tract in one week. Although rare, it is possible for a dog to transmit an intestinal parasite to a human through its saliva. These parasites are most usually contracted by a dog licking fecal matter, but they can also come from things like contaminated soil.
Most people are unaware of the bacteria that is in their dog's mouth, and think it's harmless to let their dog lick their face, myself included, but we must start being more cautious in order to avoid serious disease. If people really thought about where their dog's tongues have been, they would think twice before letting them lick their mouth and eye areas.
Posted by Nardin Awad at 2:03 PM