The Tallest Mammal on Earth 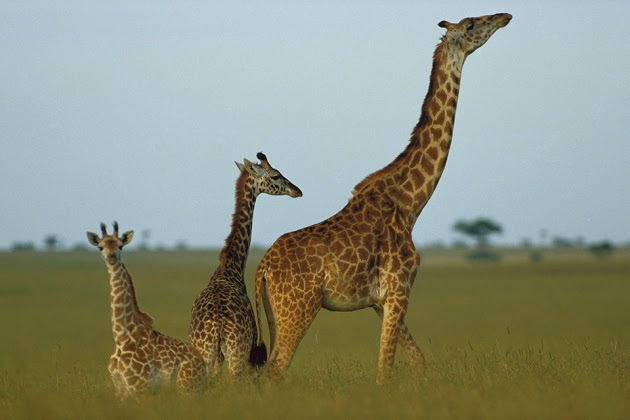 According to genetic researchers, giraffes diverged from their common ancestor, the okapi 11.5 million years ago. Okapi, however, more closely resemble a zebra than a giraffe as they do not have a long neck or other adaptations that are specific to a giraffe. To compare a giraffe to an okapi, scientists compared the gene-coding of two Masai giraffes, one from
Kenya and one from a zoo in Tennessee to the fetus of an okapi, located in Florida. They also compared 40 other mammals to the giraffe, and concluded that the giraffe is most closely related to the okapi.

When comparing the genes of the giraffe to other mammals, scientists found that giraffes have about 70 genes that hold adaptations, and none of the other mammals they studied shared any of those adaptations with the giraffe. Of those 70 genes, about 46 of those genes code for proteins that are linked to development of the skeletal and cardiovascular system. Specifically, there are 4 genes that are unique to the development of the spine and legs of the giraffe.

Reaching heights up to 6 meters tall (a little over 19 feet), Giraffes are the tallest mammals on Earth. Their necks alone can stretch out to 2 meters longs, or 6.5 feet. To deal with such great lengths, giraffes have mechanisms to prevent themselves from fainting. When lowering their neck, giraffes hearts have special valves that can pump blood 2.5 times great than a human heart. This allows the giraffe to lower their heads without fainting, because the blood can pump to their brain even when their head is down. In addition, giraffes need special accommodations to keep their balance while they walk and run. Amazingly, giraffes can sprint up to 60 kilometers per hour (that's about 37 miles per hour). Therefore, giraffes have sloped backs, long legs, and short trunks to help them from falling over.

Sadly however, there are only about 80,000 giraffes left, and the number continues to decline.
http://www.nature.com/news/genome-reveals-why-giraffes-have-long-necks-1.19931
Posted by Unknown at 5:23 PM