A lack of spatial awareness got you (falling) down? Don’t worry, a journal published in The New England Journal of Medicine may have found a genetic culprit. In a study of mechanosensation (the “sixth sense” as if is known to some), researchers came along two patients with a distinct phenotypic lack of this sensation. Further DNA sequence data unveiled both patients had a mutation on the gene PIEZO2.

The study tested each patient’s thresholds of several different sensations: vibration sensitivity, temperature change, tickle, and ability to walk blindfolded among a few others. In the PIEZO2 devient patients a shocking lack of response, inability to walk blindfolded, and “keep track” of their own limbs when moved by the researchers was observed, leading to the conclusion that the gene could very well control our “sixth sense.” Natural variations in each nonmutated PIEZO2 gene owners may vary in expression, as with any gene.


Some extra clinical investigation of the two individuals unveiled some early similarities in their poor spatial awareness: neither developed sufficient motor skills to walk unaided until about 6-7 years of age and both had early extreme scoliosis. Both shared a host of other skeletal deformities affecting their hips, fingers, and feet. 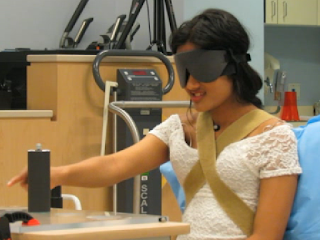 A screenshot of a video released from the study showing the effects of the affected phenotype.